FYI, this is an incomplete blog post. I received some questions from a friend and figured the best option was to quickly put a short blog post together to answer his questions. I will add more later about the great things to do and great places to eat at a future time. A great source of info is the unofficial Pueblo Bonito Owners Facebook page. https://www.facebook.com/groups/PB.owners/  You will get suggestions for great places to eat, shuttle services to the resort, etc…

There are dozens of great places to eat. I usually don’t purchase the All Inclusive package. I would rather try out new places in town. Of course, to each his or her own.

Another question that comes up, especially with all of the news about hurricanes in Texas and Florida, has to do with hurricanes in Baja.  Yes, they have them there too. The last big one was in October 2014. We were in Cabo in December of 2014 and they were still cleaning up the mess.

I guess the best advise that I could give you is that if you get a hurricane warning, get out. Many people were stranded in Cabo after the hurricane in 2014. Stranded without electricity, running water, etc… I would rather give up a few vacation days than get stuck in a mess like that, especially if I had my kids with me.

As a final note on the subject, I always get travel insurance to cover such losses. Better safe than sorry.

Photos from Hurricane Odile in Baja in September 2014

When is Hurricane Season in Baja? 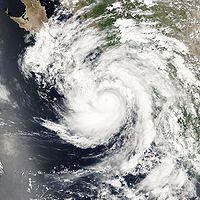 Generally, the season is from May to November.

Most tropical cyclone impacts occurred in the month of September. This coincides with the statistical peak in the eastern north Pacific hurricane season, which occurs in early September or late August.[117] Although hurricane season in the eastern north Pacific officially runs from May 15 to November 30,[118] no known tropical cyclones have impacted the peninsula in May, November, or outside the season.