Visiting Austria: I always wanted to see an André Rieu concert in Europe, so we decided to see the show in Vienna. We booked our hotel and purchased the tickets online. All we would have to do is check in to our hotel and walk up the street to pick up our tickets and head off to the show.  Of course, I would not fly to Europe just for a concert, so we planned a Viking River cruise as well as a week or so in Salzburg and Vienna to go with it. We were scheduled for the Viking River Cruise up the Danube from Budapest, Hungary to Passau, Germany. The German Waltz is what that cruise is called. We had looked at the one from Budapest to Nurenburg, but I loved the list of stops for this trip over the other trip.

We started with 3 days in Budapest. A very beautiful and charming city. 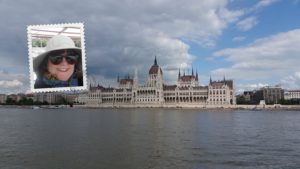 We loved every minute that we spent there. I could write a whole blog post just on Budapest and will do so later. And although they have a metro system, we walked everywhere on both sides of the river.  I will also do a blog post to cover the great places we visited on the cruise. One of the things we did chose to do during our stop in Vienna was to take the “Metro – City Walking Tour” so that we would be more comfortable when we returned to Vienna later in our trip. In fact, it was a great tour. The guide led us from the ship to the local metro station stop at Vorgartenstrasse. We all got onto the metro and got off at the Stephansplatz station at St. Stephan’s Square. 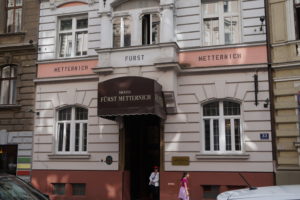 We had a great walking tour and at the end of our tour, rather than go back with the tour group, we took the metro to the Zeiglergasse stop and walked to Esterhazygasse to the Hotel Fürst Mitternich and confirmed our stay for later in the month, then we walked down the street to pick up our concert tickets. That way, we knew exactly which metro station to exit to get to our hotel and even had a little extra time after arriving in Vienna by train to easily get to the concert at the Wiener Stadthalle.  I don’t know if I mentioned it or not somewhere on this site, but my wife’s maiden name, d’Esterhazy, is derived from the name family for which that street was named.  Although they were from the part of the family in Hungary, not Austria. We also visited a park by that name and visited the Esterhazy Palace and had lunch in the Esterhazy Keller.

After disembarking at the German border in Passau, we traveled to Salzburg by train. 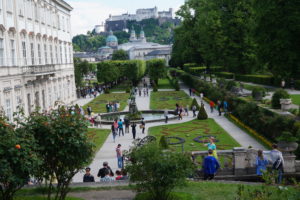 A beautiful way to see Europe and have a relaxing trip. We saw all of the sights from the Sound of Music and really enjoyed just walking around the town. We took another train on to Vienna to see the city as well as the André Rieu concert.

One of the things that I like to do before the trip is to look at various videos about the area we are visiting. Here is a sample of some of Rick Steves’ videos as well as some André Rieu videos to get into the mood. For more of André Rieu’s videos, you will find them on my André Rieu page.